A very special 1996 Royal Hawaiian Mint Silver Proof Set was repeatedly ignored by collectors at an auction website. I have to admit, I also ignored the contents of the set, however I have been monitoring the set’s price as the seller was lowering its price on each auction re-listing. There were subtle hints  in the listing’s description if you read it carefully.

Over this past weekend I made the connection and pounced on this very special 1996 Royal Hawaiian Mint Silver Proof Set and became its new owner. What makes this set very special?

First lets’ review the contents of a normal 1996 Royal Hawaiian Silver Proof set. The set has a total mintage of 1250. The set includes five coins:

These are rather high mintages for RHM (for the entire set and individual coins).

As you can see, this 1996 holder holds non-1996 dated specimens. This is a significant error. As pointed out in the bold and underlined text, four specimens are undocumented and are either pattern coins or low mintage test strike coins.

The RHM publically available mintage information have undocumented mintages for four of the five coins. It is also highly unlikely someone tampered with the sealed set and replaced them with rarities.

Rarities?  Here is my analysis of the coins.

This error assembled 1996 Royal Hawaiian Silver Proof Set is serial numbered 0754. Pictures are forth coming once I have received the set. 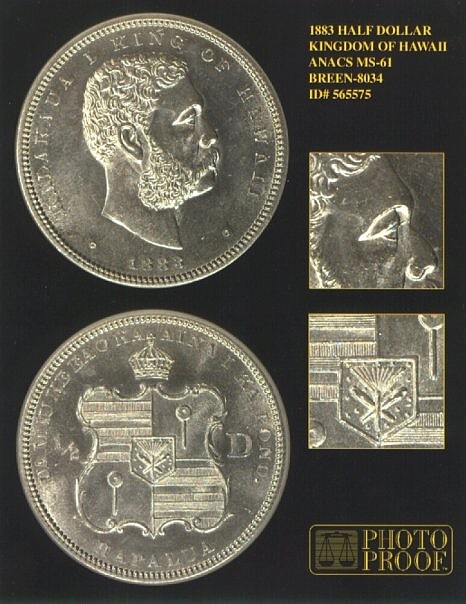 Collection funds were put to good use….GPA 4.0, graduated with honors, and it also lead me to apply for a PhD program

I previously owned the current plate coin now used  at the Hawaii lop level web page at NGC. I ordered two PhotoProofs. One to held with the coin and the other locked up for insurance purposes. While working on my Masters degree at Johns Hopkins University, I unloaded most of my collection as it sat idle and the funds were more productive toward my education (I also did that with my Bachelors degree).

I still have the PhotoProof certificate of the MS 66 Kingdom of Hawaii 25c in my library.    Here is the NGC website link

A non-internet gold purchase I made 12 days ago.  Photo taken with my phone…

When I inspect a coin,  I look at it as if it is a new specimen.

I identify anything that is out of the ordinary in its physical attributes.

I then refer to its reference listing (guidebook or catalog) to place a judgment on purchasing the coin.

I did this on a coin a few minutes ago and could not believe no one else caught the significance of this coin on eBay. So I purchased it….

There is an error in the publicly available Royal Hawaiian Mint’s information. The error is somewhat significant as a new Kaiulani variety is now correctly identified.

The error with the RHM catalog is that the reverse is identified as a “Princess Dala”. The specimen I purchases has an “Akahi Dala” reverse. At first I believed it was a mule. But if you read the RHM’s catalog carefully. Two rows above the 1994 Kaiulani Dala listing you can see what RHM did. They also used similar reverses and called it a “Hawaii Dala” and “Aloha Dala”. So what does this means?

If you inspect the 1994 Kaiulani Gold & Silver set you will see a “Princess Dala” reverse. What does this mean?

The publicly available RHM catalog is once again incorrect. You now know there are two varieties of 1994 Princess Kaiulani Dala and you read it here first…

The 1994 Princess Kaiulani Akahi Dala with COA no. 1370 was used to identify the Akahi Dala variety.

Worked on visual appeal of the book. In progress sample is below. Please click to enlarge.

I acquired this specimen recently in its original box. Those with individual boxes were sold  to bank customers. 1974 is the final year of the Franklin Mint’s  US Bank Ingot series and 1974 has the lowest population. 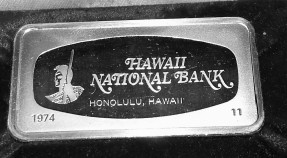 Purchased this Franklin Mint  ingot in its original sealed card. It took some time to locate one.

Shipping is high…but comparable to eBay.