This just came in my  mail today. Unlisted (same design as X #27 but in gold and silver).

Mintage is estimated to be 30.

This to identify a new error in the Royal Hawaiian Mint (RHM) database.

The RHM states that there are 1,500 specimens of the 1994 Liliuokalani Silver Dala with the Aloha Dala reverse.

This mintage number is incorrect. There are only 950 specimens of the 1994 Liliuokalani Silver Dala with the Aloha Dala reverse.

The remaining 500 specimens are in fact are 1994 Liliuokalani Silver Dala with the Akahi Dala reverse.

This is new discovery of the Aloha Dala type and Akahi Dala type of 1994 Liliuokalani Silver Dala that was previously believed to be a single type with a single mintage of 1,500.

Click image to enlarge. You can see that the obverse are the same. The reserve are different (Akahi vs Aloha). Also, notice the size of the decorative elements on each side of the coat of arms. 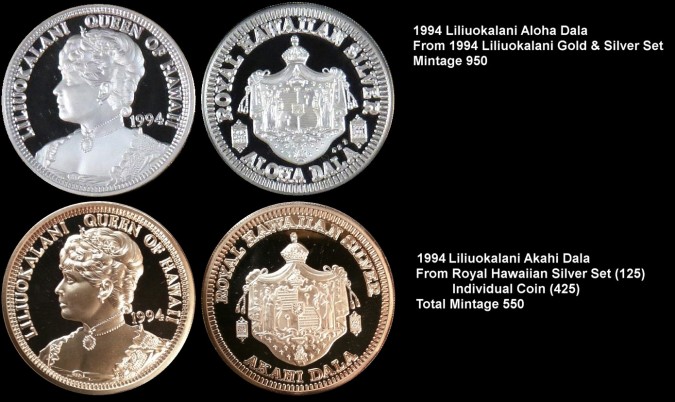 This is the second error for the 1994 Akahi Dala. A Princess Kaiulani error was also discovered in my previous blog entry with the Princess  Dala and Akahi Dala reverse.

It can be predicted  that the 1994 Kalakaua Silver Dala will have a Hawaii Dala and Akahi Dala reverse.

Seems BVN placed a letter “P” on this coin to indicate its is not silver. “P” is for Pattern (as indicated above the “999”). BVN would have got into legal problems if he sold bronze coins that indicated they were silver….

Received this coin as a gift. 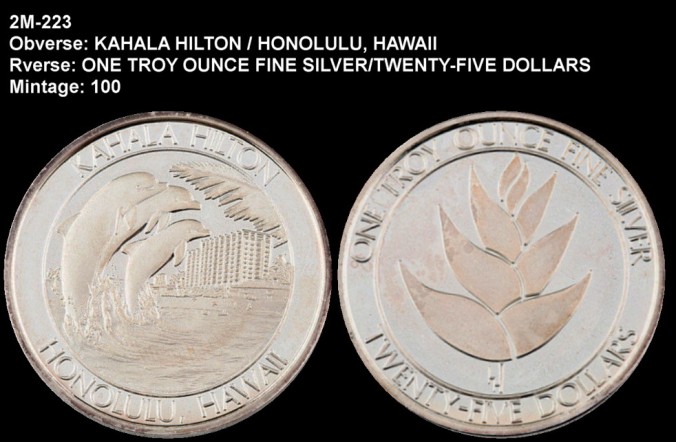 I normally have a music artist from Hawaii playing in background (mostly from youtube.com) when I write for this blog. For your enjoyment…Kalei Gamiao

I’ve been weighing and sizing each of the newly acquired Maui Coin Club (MCC) medals.

Medcalf and Russell got the size incorrect for some of the medals. Not all the MCC medals are 40mm.

One evening (December 2013) I was populating the Hawaii State section of a website with specimens from my collection. I was at the point where I completed the addition of my 1974 Maui Coin Club (MCC) uniface medal to the database.  Curiosity about this medal made me research the internet for duplicates and other MCC medals. I received no search hits.

After re-reading the MCC pages in the book, Hawaiian Money Standard Catalog 2nd Edition by Medcalf & Russell, I searched for the minter, Pressed Metals Products (PMP) from Canada. I received a hit, clicked on it, and was directed to PMP official website. I explored the website and found images relating to the MCC medals. I send an email to PMP requesting permission to use the images for the website. I did indicate that PMP would receive full credit as the source for the images.

PMP was the original minter of the Maui Coin Club (MCC) medals issued between 1973 through 1981. MCC disbanded in 1981. After a few days I received a reply from PMP. They denied me image use rights based on the fact that MCC owned the designs and their approval was required.  I immediately provided evidence that the MCC organization was no longer active (sent images of pages 120 and 121 from the Hawaiian Money Standard Catalog 2nd Edition).  At that point, PMP was supportive with my request and granted me image use rights for the website.  They also asked if I could use better quality images. I replied “yes”.

PMP searched their archive and found several MCC “working samples” or simply “samples”.  Samples are struck at the same time as the original order.  A sample was used to judge the quality of the medal from the production run and was later placed in their archive as a reference.

Organizations ordering medals from PMP are told samples are kept. It is unlikely that these organizations are aware in the existence of PMP’s archive of samples.  All samples within PMP archive has never left their minting facility and are not considered “issued” medals.  Samples are not re-strikes. PMP destroys dies that reach the age of 10-years old. In the case of MCC, no MCC official claimed the MCC samples before or after MCC disbanded. Images of the MCC samples were provided to me to use at the website.

In one email exchange, I inquired about my 1974 MCC uniface medal (PMP later provided very helpful information).  In the same email, I jokingly asked if I could buy a few MCC “samples” for my collection. I believed it would be impossible to buy any in their archive. I was pleasantly shocked in that they entertained the idea of selling their archived MCC medals to me. They asked for an estimated value for each medal and I provided it.

After a few days, they made the decision to sell their MCC samples to me since they were collecting dust and it would be in better hands with someone who would appreciate them. They ask me to provide a buy price. I quickly provided a buy price for their entire inventory of MCC samples.

A few days later PMP sent an email indicating they found two more MCC samples in their archive and provided me with an amended buy price. I agreed to the terms of the amended buy price with two conditions. Condition 1: Do not clean the medals. Ship them to me as how it was found in the archive. Condition 2: Provide me a letter of provenance (with a signature by a company official) indicating I am the original purchaser of the MCC samples, include a complete inventory of the purchased MCC medals, and their status as MCC working samples.

The MCC medals were delivered today. I am the proud owner of rather unique set of MCC medals. Below is one of the medals received today. Click to enlarge.