Below are images of a 1974 Maui Coin Club Silver Uniface Medal in my collection. 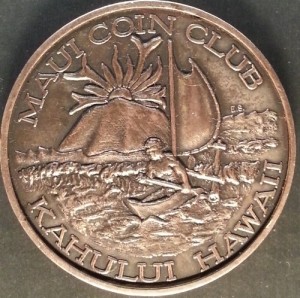 Information from Pressed Metal Products (PMP) (original manufacturer of the Maui Coin Club medals) indicates that this was a special striking that  allowed the club to use the reverse as an engraving pad.

It also can be said that the  two images on upper left page 120 (identified as 2M-314 and obv 2M-302 are s incorrectly labelled) of Medcalf & Russell.

Below is a portion of an email from PMP.

There are no mintage numbers for this  special 1974 Maui Coin Club uniface striking. Original  striking  mintage is 250. If I had to venture a guess, I would say a dozen or less. The  uniface specimen in my collection was purchased from an individual currently living on Maui.

Finally, this uniface medal should be M&R listed.