This coin is a Royal Hawaiian Mint issue.

1) Gov. Ben Cayetano struck the first coin at the Royal Hawaiian Mint. Star-Bulletin provides the evidence. Coin is shown in the article. http://archives.starbulletin.com/2000/08/22/news/wild.html

2) Hallmark on the reverse of the coin is RHM (bottom image).

I first reported this find in my 12/17/2013 blog entry (see above link). This is the first known Royal Hawaiian Mint error.

I took additional pictures today (with new DSLR camera and close up lenses).

Current catalog assigned number is RHM-PVK-21-06 in my work in process book. 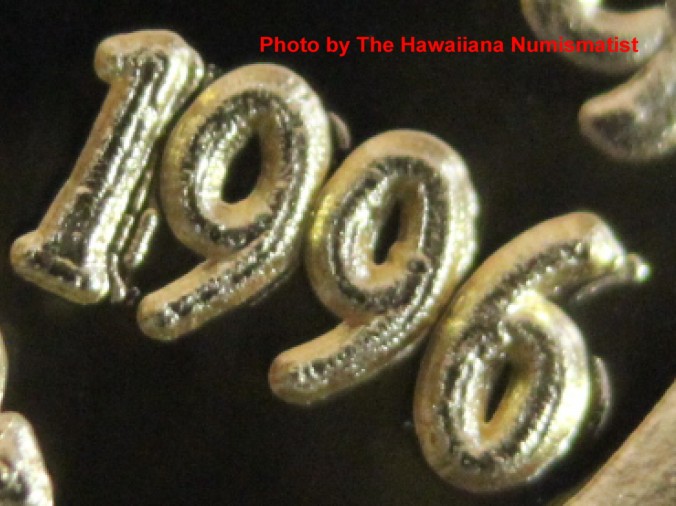 The image below is an example of this unlisted variety.

Many of the Franklin Mint issues have been mishandled by so-called dealers. One example is the medals encased in postal covers. These dealers (and collectors) focus on the medal and discard the postal cover. When this happens the degradation time-clock starts:

One of the things I’ve been determining is a attrition rate formula to determine the “acceptable collectible supply” for the Franklin Mint issues.

For silver medals postal cover scenarios an example after 38 years after issue:

In this example only 10% of the mintage intact in original postal cover will be available to Hawaiian collectors.

The topic of determining price for the Captain Cook medal is subjective. Most use the M&R guidebook (which is now 24 years old). Then there is the lack of information (mintage and source set)) in the M&R guidebook. So how did M&R set the price?

In this Captain Cook example, its listed as 2M-79 with no mintage or source set identified. The source set somewhat helps to identify the demand for the individual medal based on the Franklin Mint collector’s demand for the set. The Great Explorer Medals was sold world-wide (not only in the US) making it also hard to locate.

The 10% mintage population rule seems to work for me in collecting intact specimens in original Franklin Mint packaging.

When was the last time you saw a 2M-79 Mint in Package for sale? 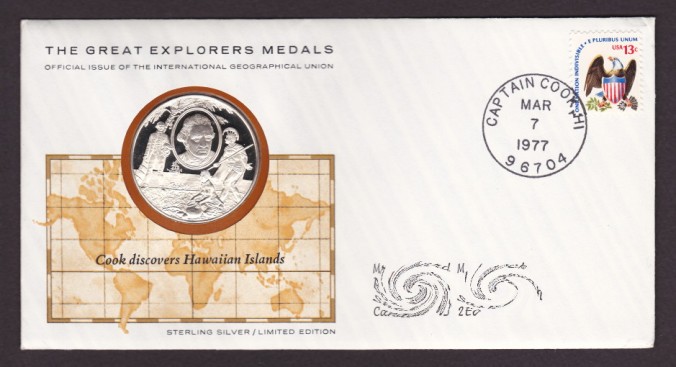 Listed as FMI-A01 in my  just released book Hawaiian Numismatic Issues from the Franklin Mint: Medals, Coins and Ingots.

This Aloha Airlines sterling silver ingot has a mintage of 1,777 (mintage is deceiving as Franklin Mint collectors do not breakup sets). If you locate a FMI-A01  today, its a remnant from a broken up completed set.

Hint: The choicest specimens are those in original Franklin Mint packaging.  The proper collector term is Mint in Package (MIP).

Hint: The original Franklin Mint paperwork is also desired and extremely hard to come by since most specimens are a remnant from a broken up completed set.

Here is a MIP FMI-A01 with its original Franklin Mint paperwork and magazine ad.

Only 30 coins were struck for each of the six designs.

Here is my hoard (not included is my Princess Kaiulani) of eight (obverse design not shown on purpose).

Here are the Krause Publication listings (with my correction):

(has Kalakaua image, should be Kaiulani image)

(has Liliuokalani image, should be Bust of Kamehameha holding spear image)

(has King Kamehameha Sovereign image, should be Liliuokalani image)

(has Kaiulani, should be Kalakaua image)

(has Bust of Kamehameha holding spear image, should be King Kamehameha Sovereign  image)

This is correct image with description

These are fairly unknown silver issues struck by The Honolulu Mint.

My previous blog about the gold version (with images)  of:

The style of both coins differ slightly.

On the obverse: English vs Hawaiian. Date vs year only.

On the reverse: Placement of  words ‘IOLANI PALACE. Change in fonts. Size and detail of the palace. 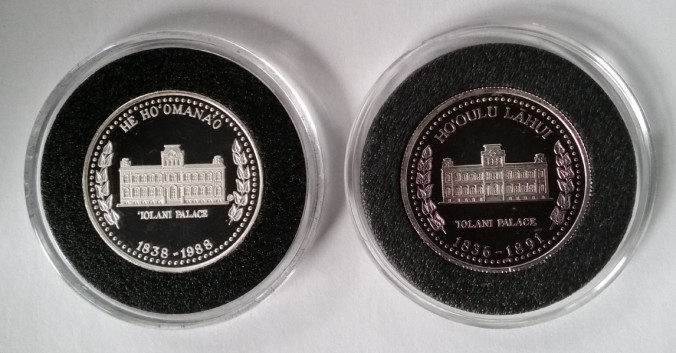